Paris, FRANCE – Climbers Against Cancer (CAC) is pleased to announce that founder John Ellison has been appointed as an Honorary Member of the International Federation of Sport Climbing (IFSC) during the IFSC Plenary Assembly held March 1, 2014 in Paris, France.

Ellison is an avid climber from Great Britain, who in late 2011, was diagnosed with terminal cancer. Choosing to be as optimistic as possible with the outcome, Ellison founded CAC in January of 2013 in order to bring together the incredible support and camaraderie of the climbing community to assist in raising both awareness of the disease and funds for cancer research.

The results have been unprecedented.

In just over a year, CAC has raised close to $350,000 (USD) through its fundraising efforts, including the sale of CAC iconic t-shirts and hoodies (over 13,000 to date) that are being worn by climbers all across the world. On an international scale, climbers of all abilities have talked about the cause on their blogs and shared their passion to help others through both word of mouth and via their websites. Competitions and fundraising events in support of CAC have taken place at many venues on many continents, with the backing of the local authorities and in many cases national federations. The IFSC, the sports governing body, has also added their weight to the cause.

Ellison addressed the IFSC Plenary Assembly in Paris and spoke of the unique support network within the climbing community. “As you all know, the spirit of these events [climbing competitions] is unique and contagious. Climbing remains one of the few sports where, even at the most competitive levels, athletes from different countries support and help each other. I had already had some success with raising funds for cancer research amongst friends in the UK and I realised that if I could harness the tremendous energy of the international climbing community, for a cause other than sport, we could achieve great things”

To date, CAC has made donations to the world’s best cancer research organisations on three continents: in France, in Australia, in Canada. This included a $15,000 donation to the British Columbia Cancer Foundation during the 2013 IFSC World Youth Championships that were held at The Boulders Climbing Gym in Central Saanich, Canada in August of 2013.

The benefits however go beyond the monetary aspects. “More importantly, we are starting to raise awareness about the importance of our health, of cancer screening, and of cancer itself,” added Ellison. “We’re making it okay to talk about illness and death, we’re giving people a chance to show empathy. These things, in turn, make us all grow as human beings, and as a society.”

Ellison is confident that the groundswell of support generated over the past year will continue once he is gone and used science to wax poetically about this. “We all are aware that, in climbing, we’re defying Newton’s law of gravity. But here in Paris, I discovered that we’re also defying the law of entropy, which basically states that – in a closed system – everything is in a state of decline…once something is born, the natural thing is for it to shrink, decay, and die. It is, really, the way of the earth, and it has its own beauty.”

“In Paris, however, watching the crowds of climbers and coaches celebrating our sport, and our connectedness, I realised that there is one exception to this law. There is one natural thing that is born, and can grow and prosper, continuously with no end. And that is the human spirit. Over the past 13 months, Climbers Against Cancer has been proof of this.”

“The climbing community has proved this – has proved once again that we are more than simple principles of science, that we are more than the sum of our parts. Everyone of you who has bought a t-shirt, a hoodie…Everyone of you who has sent in photos of you competing, climbing, enjoying life in your CAC gear…Everyone of you is contributing to a movement that serves to show how, together, we’re capable of making the world better, one little step at a time. I thank you for this, from the bottom of my heart.”

About Climbers Against Cancer (CAC)
Established in January of 2013, Climbers Against Cancer was established by Great Britain’s John Ellison in order to raise awareness about the disease and funds for cancer research. Primarily through the immense support of the climbing community and the sale of iconic CAC t-shirts and hoodies, the organisation has raised close to $350,000 and has made donations to leading cancer research organisations in France, Australia and Canada. Learn more, donate or purchase a t-shirt or hoodie from our shop. 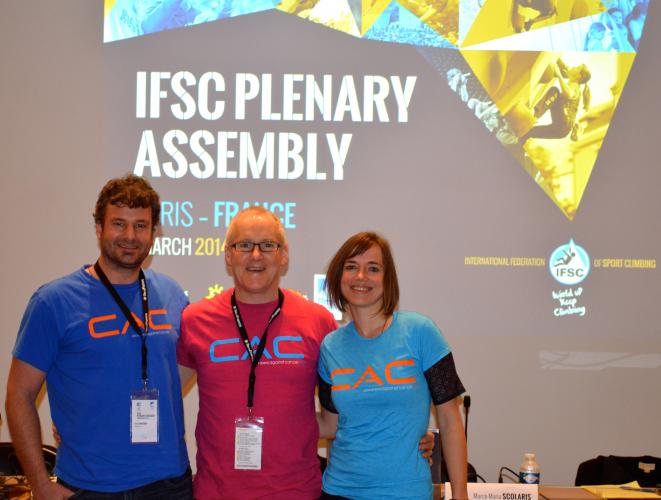