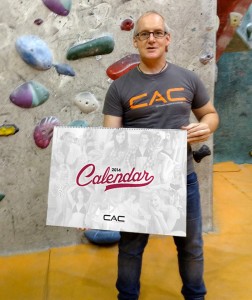 TODAY (Thursday 14th November, 2013) sees the launch of the new, and first ever, Climbers Against Cancer (CAC) 2014 calendar featuring female athletes from the UK, USA, Germany, France, Austria and Japan.

The calendar, which features a number of the best climbers from six countries and three continents across the world, has been created to raise money for the the UK based charity launched in January, 2013.

Shot in the USA in American five time national champion Alex Johnson’s trailer, the 1950’s style calendar, is not only motivated by a great cause but is an inspirational showcase of positive female role models. The 13 girls involved in the project have healthy physiques and demonstrate that sportswomen can be sexy without being skinny size sixes as they don swim suits, denim shorts and cheeky checked shirts.

The final image is of course December and brings together all of the girls involved in the shoot wearing the now world famous t-shirts that have helped spread the charity’s message across the globe.

First established by lancashire based climber John Ellison, who was diagnosed with advanced cancer in 2011, to raise awareness and cash for those whose lives are touched by cancer, the charity has bought the worldwide climbing community together in support of his cause. Supporters as far and wide as Singapore, South Africa and Australia have bought his brightly coloured t-shirts in their thousands, sharing pictures of them across the CAC website and social channels.

Shauna Coxsey comments; “As a trustee of Climbers Against Cancer I wanted to do something different, fun and light hearted for the cause and this seemed perfect. A calendar full of climbing photos would draw some attention but people see us climbing all of the time so it wouldn’t be different or unique.

“I asked some some of my climbing friends what they thought and if they wanted to get involved and the whole thing evolved rapidly. We had so much fun making this calendar. Dressing up, posing and doing something totally new to all of us.”

John Ellison, founder of CAC comments; “CAC has been a roller coaster ride for me from the day I dreamed it up on discovering I had advanced cancer. The support of the climbing community has been overwhelming and has driven me to find as many ways as possible to both raise money and awareness, bringing what can be such a taboo subject out into the open in the hope it will help those who’s lives have been affected by the disease.

“This calendar will be a huge help with both of these missions. I am hugely grateful to Shauna and the rest of the girls plus photographer Caroline Treadway and designer Ben Jones without whom the calendar would not have been possible. I can’t wait to see what everyone thinks of the finished product.”

The calendars are available from the online shop for £20 in the UK and Europe and £25 to the rest of the world including postage and packaging. However In order to keep the price of the calendars at a minimum and due to distribution costs, they will only be available in Europe in quantities of 10 or more and the rest of the world in quantities of 10 or more. So we encourage everyone to make arrangements with your fellow climbers and climbing gyms/walls in order to purchase this fantastic limited edition calendar. Many climbing gyms/walls will be stocking the calendar also.

Shauna, Leah and Mina will also be signing calendars at the Kendal Mountain Festival on Friday 15th November at the Kendal Brewery Arts Centre.