Central Saanich, Canada – Over 100 climbers had the opportunity of a lifetime over the February 20-22nd weekend, as they attend the first ever International Federation of Sport Climbing (IFSC) World Climbing Camp that was held at The Boulders Climbing Gym in Central Saanich, British Columbia Canada. 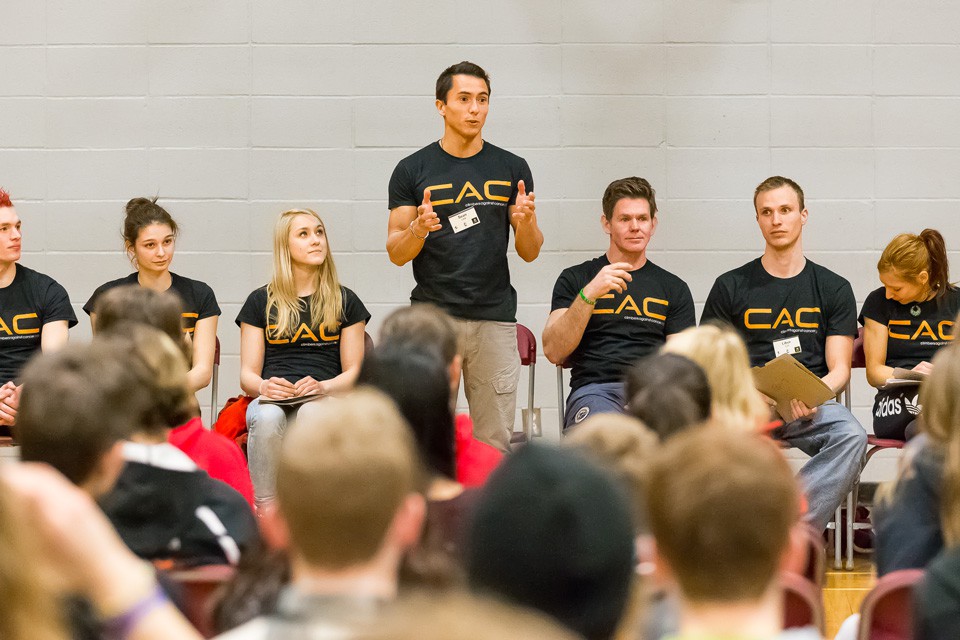 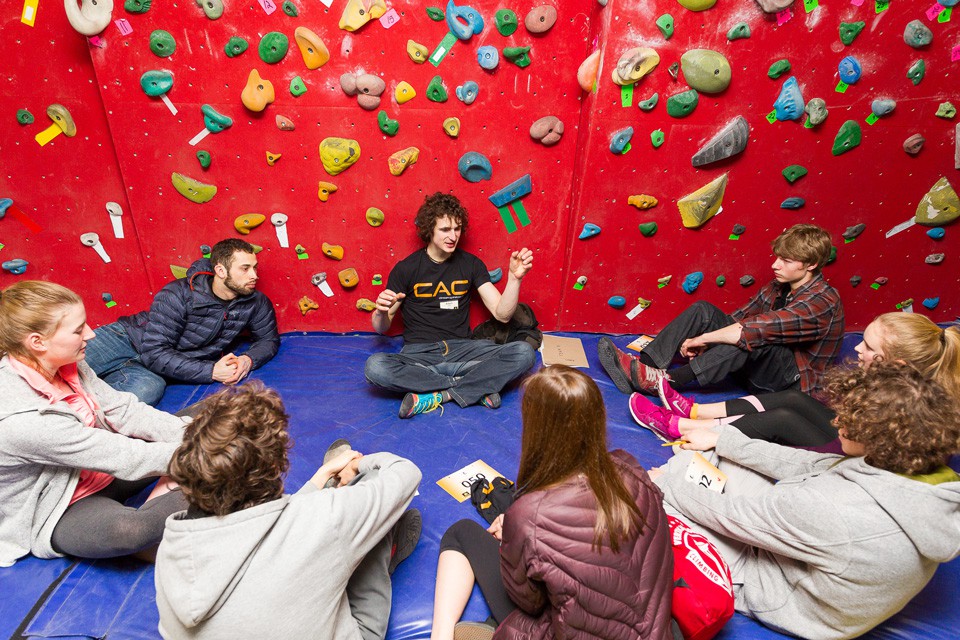 “We are incredibly blessed to have such a wealth of talent here this weekend,” said Boulders Chair Kimanda Jarzebiak during the event. “The participants are excited to be here and are eager to learn what it takes to excel on the world stage in the sport.” 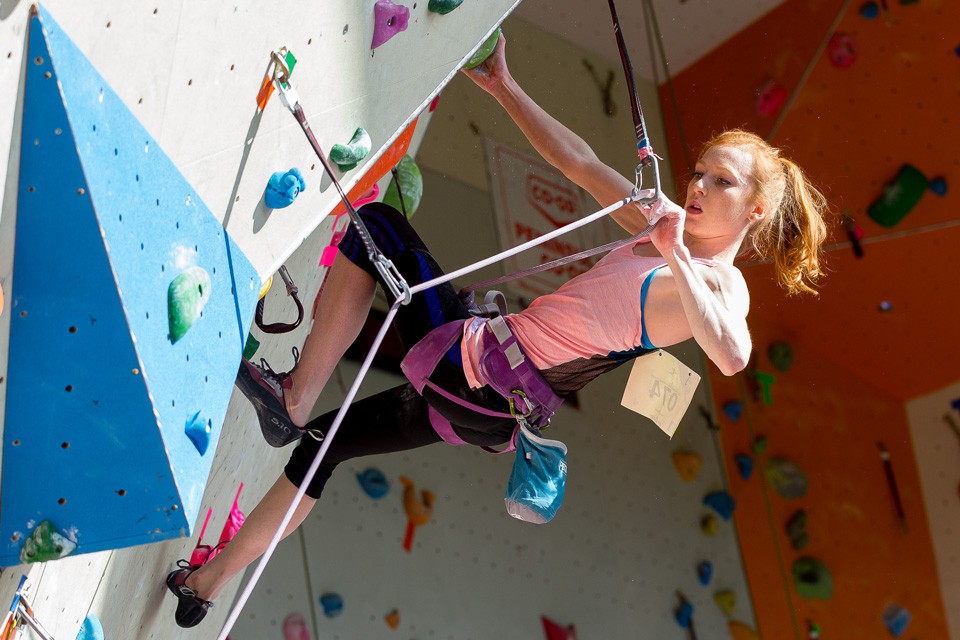 Other world renowned instructors at the event included: 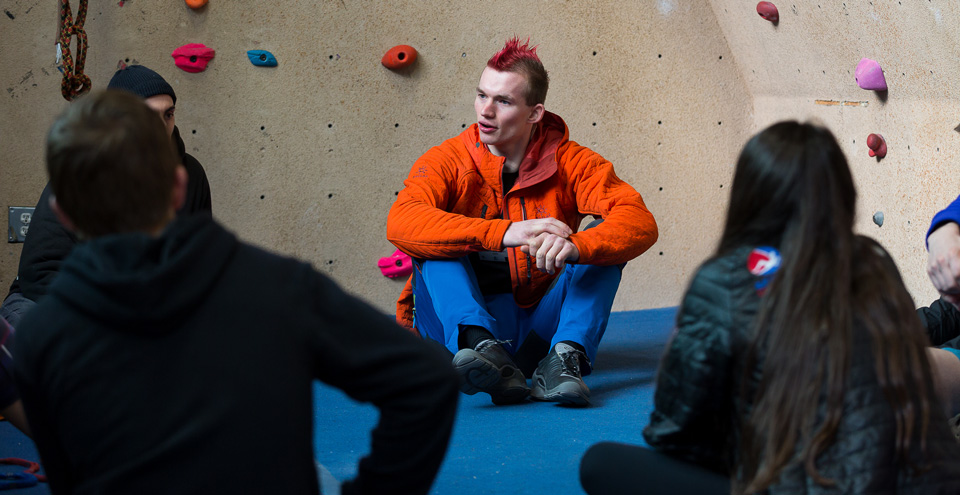 Germany’s Sebastian Halenke chats with his group of young climbers prior to the mock competition at the IFSC World Climbing Camp (Photo: Christian J. Stewart)

While most of the workshop participants were predoinantly from British Columbia, including a number of climbers who call The Boulders Climbing Gym home, there were a number from Ontario and Quebec, as well as a strong contingent from the United States. 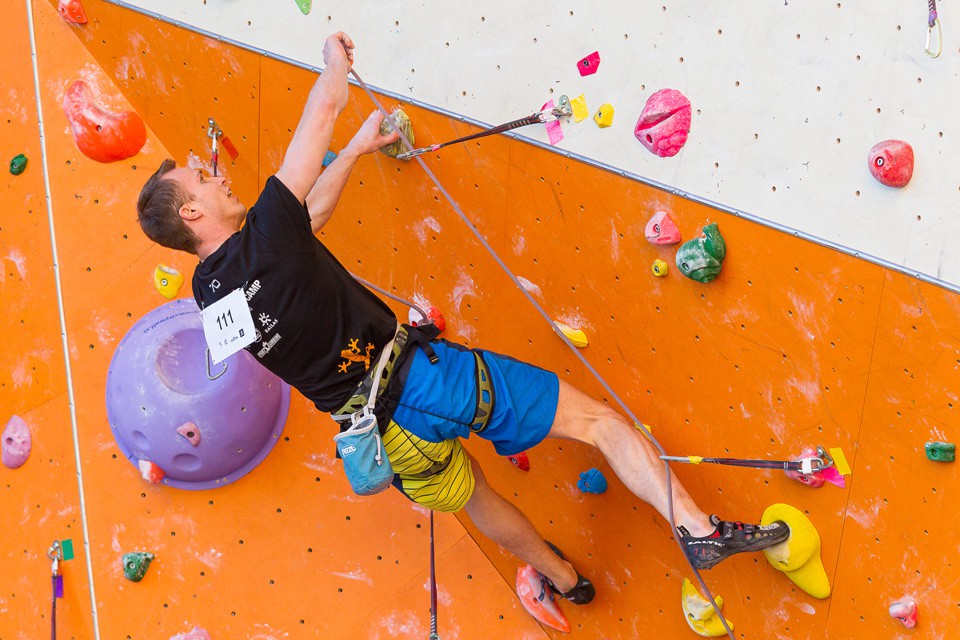 The World Climbing Camp was also an opportunity for young climbers to see the world’s best out of their element somewhat, for example here when Czech speed climber Libor Hroza took a turn on a lead route (Photo: Christian J. Stewart)

One such participant was US climber Kai Lightner who travelled all the way from North Carolina to attend. Lightner, one of approximately 15 US climbers at the workshop and who climbed at The Boulders at the 2013 World Youth Championships, was quick to sign up when he heard this workshop was happening, “The main reason I came here is simply for the opportunity to learn from the World’s best climbers. They have the so much experience on the world stage and being able to learn how they train and prepare themselves is an important aspect of why I am here.” 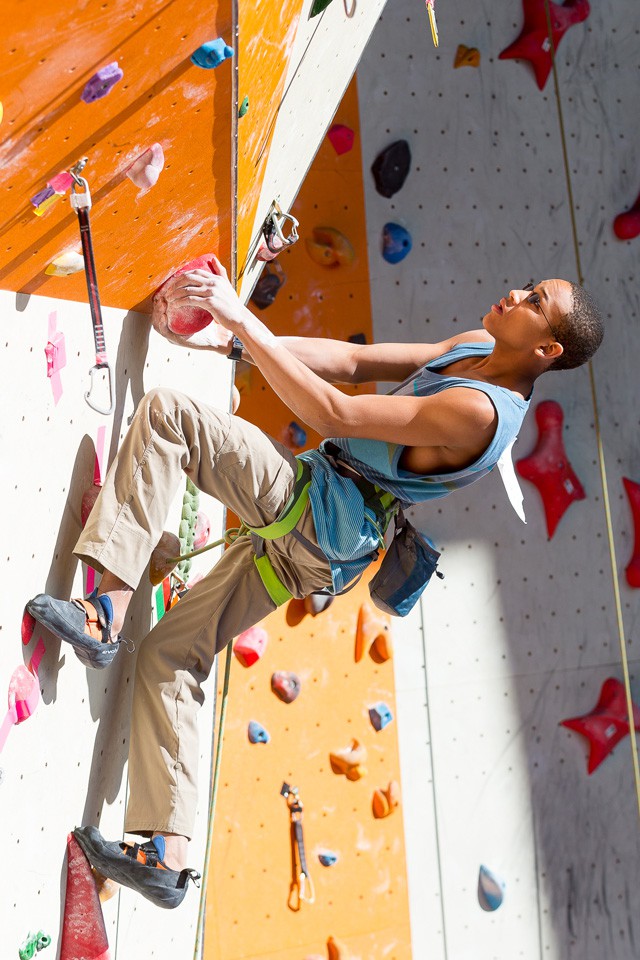 In one of the early workshops, Lightner made sure to get into a small group with Slovenian climber Domen Skofic. “Domen is a great role model for me, as he was just aging out of youth as I was coming into it, so he is young enough that we can all relate well to him, plus he already has an incredible amount of World Cup experience and has a ton of advice to offer.” 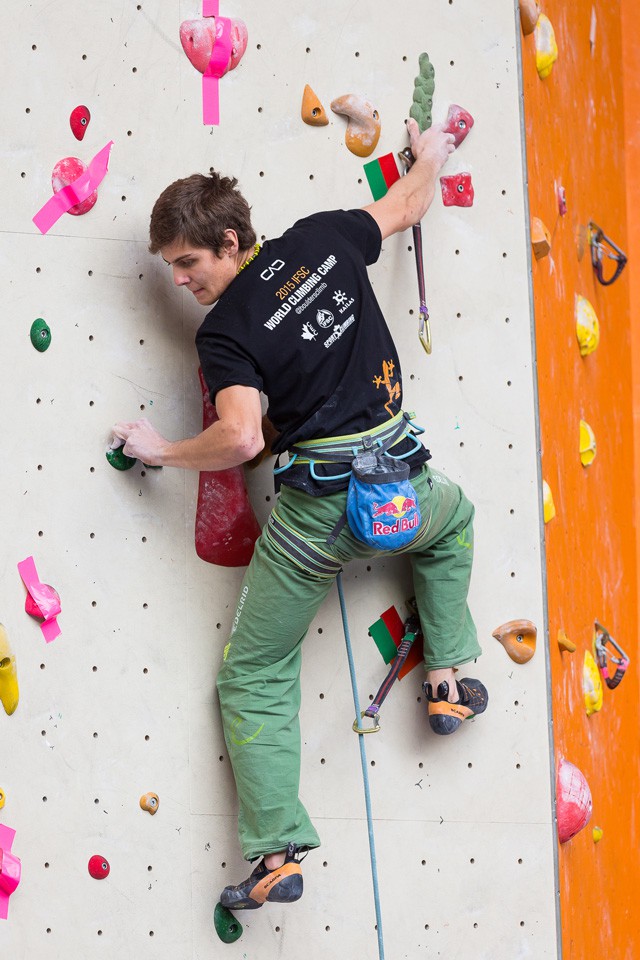 Rising star Domen Skofic of Slovenia was on hand at the World Climbing Camp to pass along his knowledge and skills to many youth climbers (Photo: Christian J. Stewart)

The workshop participants were put through a range of activities at the camp. On Friday, small groups broke out to have intimate discussions and introductions with the various instructors and they then attended various workshops on such topics as mental and physical preparation, route setting, motivation, nutrition and technique.

On Saturday and Sunday, the groups attended more workshops and then went through mock competitions in both lead and speed climbing. 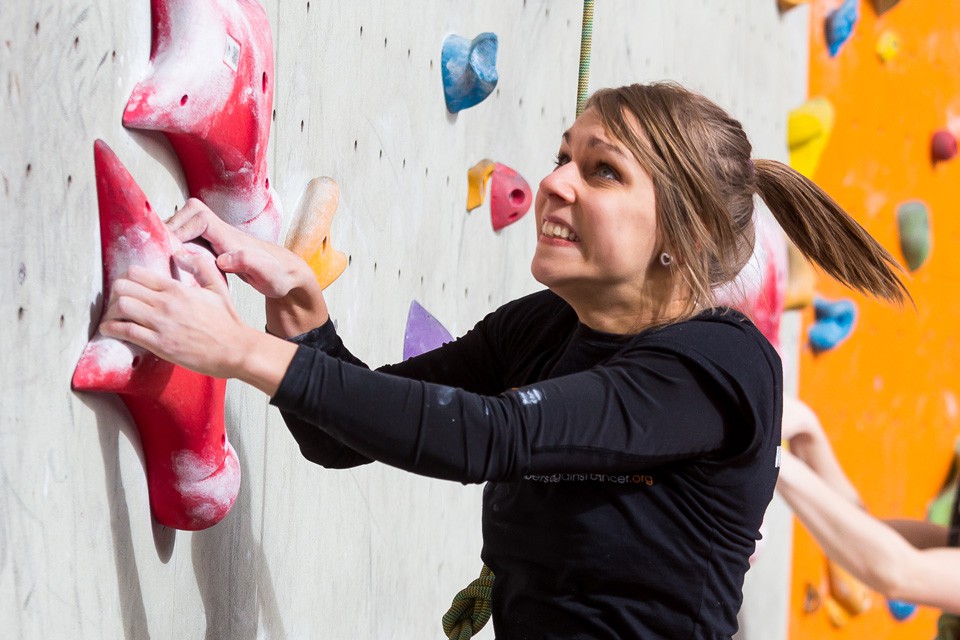 They were also treated to some incredible climbs from their mentors, including Adam Ondra topping one of the most difficult routes on the wall in a spectacular display of strength and endurance on Sunday. 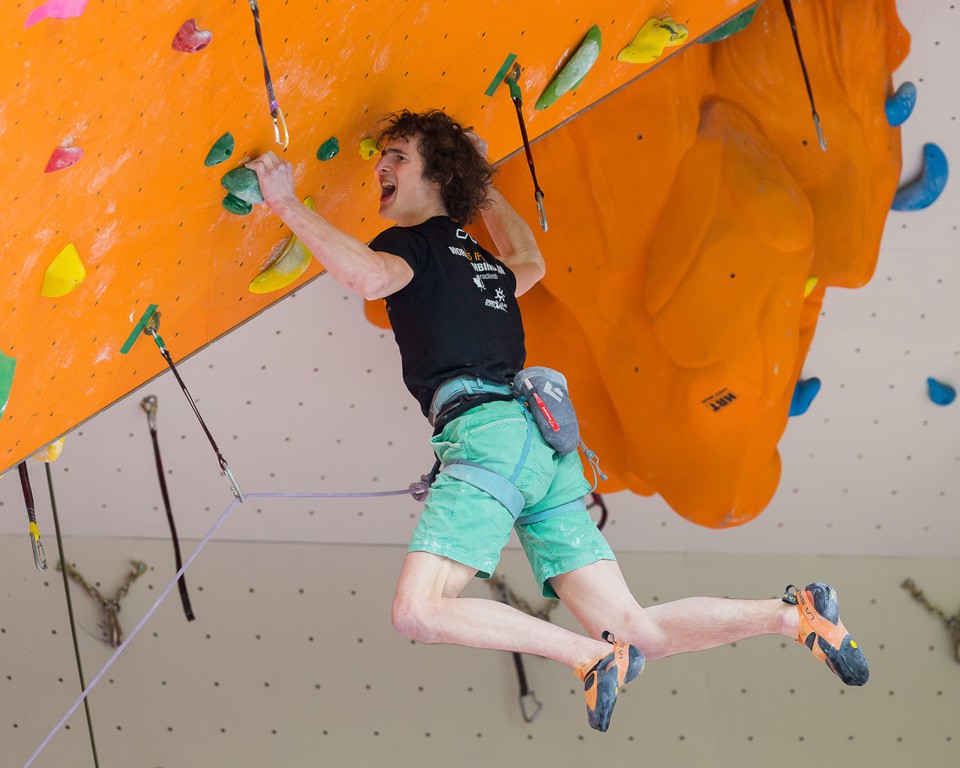 Adam Ondra hangs from the ceiling of The Boulders during his ascent and topping of one of the most difficult routes set at the World Climbing Camp (Photo: Christian J. Stewart)

The event was also another fine opportunity for all climbers in attendance to show their support for Climbers Against Cancer (CAC) and founder John Ellison. Each climber, instructor and volunteer were provided with a special IFSC World Climbing Camp CAC t-shirt and many wore it throughout the weekend to show their support. 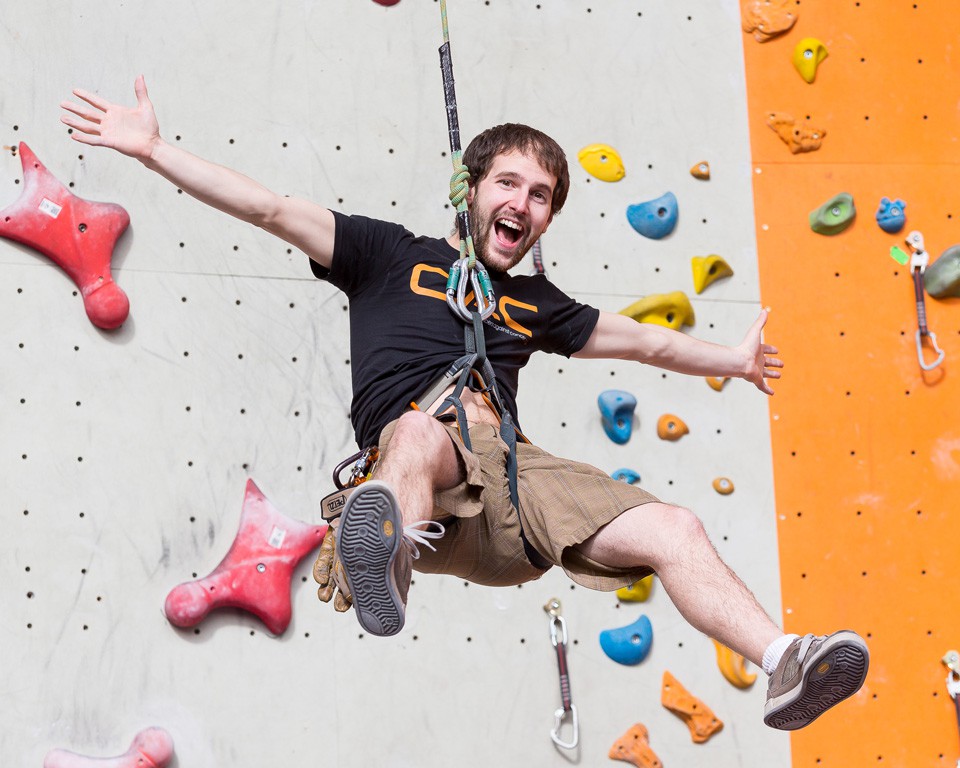 Stephen Anderson and all others who attended the camp had a great time and were proud to show their support of CAC by wearing special CAC camp t-shirts (Photo: Christian J. Stewart)

The group also posed for a huge “CAC” group photo at the end of camp, where over 135 climbers and staff proudly posed wearing their iconic tees. The photo was the second largest such show of support for CAC, next only to a similar group photo taken at the 2013 World Youth Championships, also held at The Boulders. 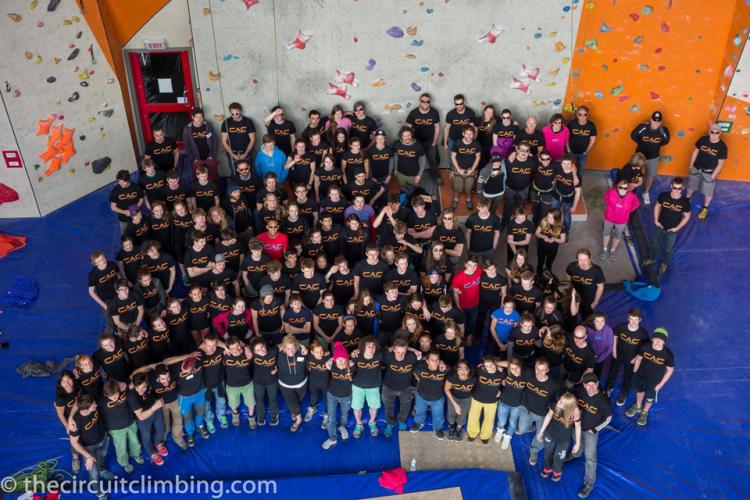 World Climbing Camp attendees and instructors show their support for CAC with a large group photo at the end of camp (Photo: Eddie Fowke, Circuit Climbing)

All-in-all the camp was a great success. The climbers were especially appreciative of the chance to get “up close and personal” with their mentors and learn from the top athletes in the sport and all who attended and participated expressed that they would love to do it all over again next year.

All climbers, athletes and instructors were thrilled with the camp and will look forward to doing it all again next year (Photo: Christian J. Stewart)